Every election year carries with it the potential for structural change—and with the ongoing economic crisis from the pandemic, there is a growing sense that this year may be ripe for bigger changes than normal. 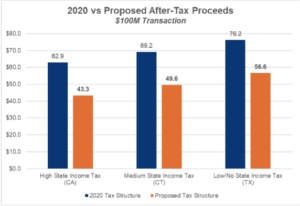 One direct impact that owner-operators may feel is a higher tax burden—particularly if the Democratic Party controls both the Executive and Legislative branches and is able to implement the tax policies articulated in its party platform. This would have profound tax implications on M&A transactions, which at the highest-bracket tax structure include a 20.0 percent capital gains tax and a 3.8 percent Medicare surtax, for a total federal tax rate of 23.8 percent on sale proceeds.

The Democratic Party’s campaign promises include bringing capital gains tax in line with federal income tax, which would be raised to the Obama-era level of 39.6% at the highest tax bracket. The existing Medicare surtax of 3.8% will stay, resulting in a total 43.4% federal tax rate when selling a business.

Assuming tax structure is changed following the election to match the Democratic Party’s campaign promises, there will need to be a significant increase in valuation in 2021 to achieve the same proceeds business owners would get in 2020. This means achieving similar after-tax proceeds will require higher transaction multiples–for example, to get the same after-tax transaction proceeds for a California-based business in 2020 at 7.00x EBITDA, business owners would need to sell the same business for 10.2x EBITDA.